I had one job before my run – go to London and pack my things up. Oh, and a few cheeky Christmas beers were arranged with friends too. Unfortunately, those cheeky beers turned meddlesome and I left London not only with less than I came with but annoyingly, one thing I really didn’t want.

I had an ace night out without any drunken mistakes and I felt pretty good on my way home. I checked my phone to see if I sent/posted any embarrassing messages. Nope, all was good. I took a shortcut a few minutes from the house (this is where those cheeky beers turned meddlesome) and approached a wall.  ‘Hey, no probs’ I though and jumped down. CRACK! It got a bit blurry after that but I knew what had happened instantly. I landed on my left ankle and despite my fondness for it, my drunken brain let it down. I broke it in various places and several parts chipped off.

I couldn’t believe it. I thought my adventure was over before it had even started. Honestly, apart from feeling like a dick for jumping off the bloody wall in the first place, I felt so disappointed. Proper disappointment. A million times more than when I was a kid and searched a box of Kellogg’s Frosties for that free bike reflector, only to find nothing.  Worse than having to do country dancing with a girl, in font of the whole class in just my pants because I forgot my P.E. kit. I was gutted. But someone told me that this adventure started when I first had the idea, not when the actual run starts. ‘This is all part of the adventure. It’s another story to add to the many more you’ll have while on the run’. I liked what they were saying and they were right. I could just let this accident be the end of the British coast run but how good will it be when I eventually do it. It’ll make finishing even sweeter!

So to sum it all up, I still have every intention of running the coast. Not sure when I’ll start but I’m hoping it’ll still be 2015. My recovery is going well and I’m now allowed 50% weight on my ankle. I have a second operation later this month then after that it should just be physio. Just taking it step by step (only without any actual steps…).

No, it wasn’t that impressive. It was this bugger here: 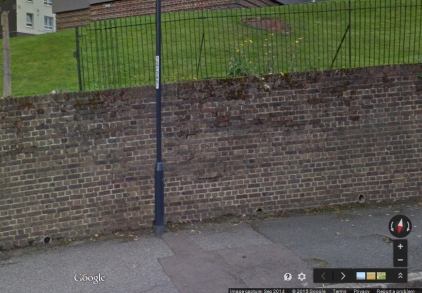 Tell your mates about this: